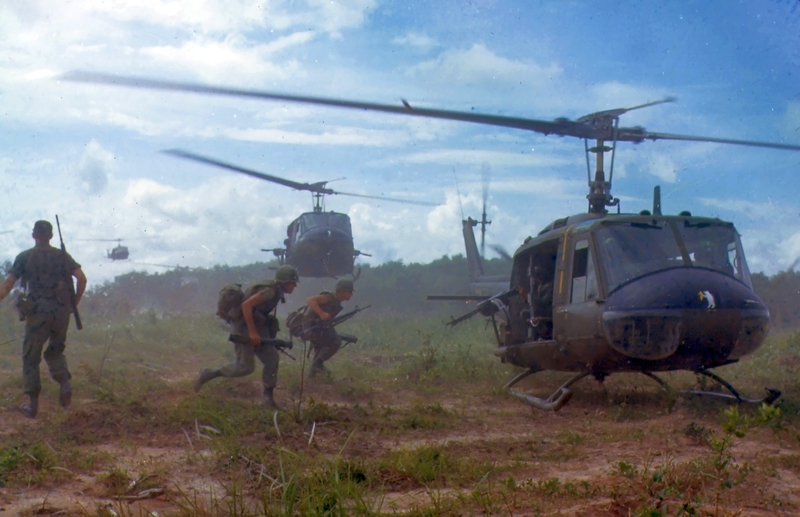 Through our work, our family has the great privilege of getting to know elders in our community, and to hear stories from their lives. We’ve had the opportunity to care for and get to know veterans of World War II, including a soldier who fought at Bastogne with General Patton’s army; a woman who as a teen was part of the Polish resistance in the Warsaw ghettos; the daughter of Irish immigrants who met Helen Keller while serving in the foreign service in Egypt in 1952; an Auschwitz survivor, who survived ten concentration camps; and others.

One of our clients and friends, John Eilertson, was a captain and pilot in Marine Medium Helicopter Squadron 365 in Vietnam from 1964-65.

John flew hundreds of missions during his time in Vietnam, transporting wounded soldiers, Marines, and South Vietnamese civilian and military to medical facilities; supporting Marine patrols on the ground; evacuating American and Vietnamese wounded, as well as Vietnamese refugees; resupplying marines in the field; search and rescue missions; and combat operations.

He received the Distinguished Flying Cross for a mission he flew on July 12, 1965, helping rescue a reconnaissance Marine patrol that had found itself, while on a scouting mission about 30 miles west of the American Airbase in Da Nang, suddenly surrounded by 50–100 Viet Cong soldiers.

Later, years after the war, John, a Catholic, traveled with his first wife Edie to Assisi, the birthplace of St. Francis, the 13th century saint. There he happened to meet a retired Marine Colonel who had been a good friend of the patrol leader, Frank Reasoner (see tribute below), who died that day in 1965 – the only casualty. For John, in the holy city of Assisi, this fortuitous meeting brought something full circle. “It was unique,” he says. “It was almost like a God-given meeting with somebody who knew him.”

Here is John’s story, as told to Cassidy & Kate:

Edie and I went to Assisi and were staying overnight in a hotel just outside of the city. We were going out for dinner and while I was waiting for Edie downstairs in the lobby, this gentleman came in and we got to talking. It turns out he’s a retired Marine Colonel who had been Regimental Commander of a regiment at Camp Pendleton [the Marine Corps Base about 50 miles south of Newport.]

We got to talking and he found out that I’d been a Marine helicopter pilot in Vietnam in 1965. And it turns out that I got a Distinguished Flying Cross for helping rescue a 30-man patrol that had been surrounded by the North Vietnamese about 30 miles southwest of Da Nang.

Their company commander was shot and killed, and they had a lot of wounded and they put out a call for withdrawal from the field.

It was the middle of the night and I was in my quarters at the airbase and they told me I had to go to the operational tent. We got a real quick briefing and went right out there to try and rescue our guys in the field. It was pitch black. One of those nights that was just absolutely pitch black. No moon or stars or anything.

We cranked up two helicopters. I was flying the second helicopter.

Bill Barber, who was an old war office chief, who had served in World War II and Korea and had a lot of flying experience, he was leading in the first helicopter, and we went roaring out there.

The reconnaissance patrol had lit a mag flare that was really bright. Bill called in on the radio and went roaring in and the North Vietnamese just opened up, firing at us. They had three machine gun positions set up around the patrol. You could see the green tracers from their bullets triangulating and lighting up the darkness. They couldn’t see us because we flew without any lights on, but they could hear us approaching and would fire at sound.

Bill went in and landed, and his crew hauled in as many Marines as they could, about ten, I think. Then he called out over the radio and quickly took off again.

Then I went roaring in on the position that I had seen in the black and the darkness.

There was no light at all. I had to just hover over the position, as best I could, and used a really sparring approach into it.

I lucked out and came out pretty close to where Bill had taken off from.

There were trees on both sides, so you had to be really careful landing. It was pitch black. I went roaring in and landed.

I took on a large number of people. I forget exactly how many now, but apparently I landed pretty close to the large body of them and hauled out the most. There were a lot of wounded. I told my crew chief: Get as many as you can. They came pouring on; and that left three left in the zone: a company commander, one other marine, and a dog. (The Marines had a dog with them on patrol. This was fairly common, John said. “If you had a sniper, you’d send the dog in. We’d take them into the field.”)

Our helicopter was so heavy, the last three couldn’t get on.

There happened to be a reconnaissance helicopter from our squadron that was out that night on a separate mission, and which happened to have on board a battalion commander. He heard our mission over the radio and, as luck would have it, gave them the order to fly in and support us. I told my copilot, as we were hovering above the landing zone: Quickly turn on our lights and turn them off; give them a flash of lights in the zone, so that they could spot us and come in. And that was enough for them to be able to get in and get those last three guys.

I made a roaring exit out of there so as not to hit any trees. And we made it out okay.

It all happened fast. It’s scary but you have to do the best you can. And when I went out, I did a sharp turn to stay clear of the trees. There were some tall trees, bordering fields.

It turns out that that company commander who lost his life, Frank Reasoner, was a senior first lieutenant and was a good friend of this gentleman I was talking to in Assisi. It was unique. It was almost like I was having a God-given meeting with somebody who knew him.

They had lived, as a matter of fact, in a house almost across the street from each other at Camp Pendleton. I couldn’t believe it! Here he was waiting for his wife to have dinner. And so we all had dinner together that night. Almost like it was a miracle. 1st Lt. Frank Reasoner, one of the patrol’s leaders and a graduate of West Point, was killed during the attack, having thrown himself into the line of fire to save the life of a fellow wounded Marine.

Prior to his death, Reasoner showed tremendous bravery and selflessness, initially single-handedly taking on Viet Cong fire – despite the fact that they were surrounded by three machine gun positions and some 100 Vietnamese fighters – to try and allow his men the space to retreat to a safer position.

He was posthumously awarded the Medal of Honor – the first Marine to receive the Medal of Honor during the war. The Marines also renamed the third reconnaissance base in Da Nang “Camp Reasoner.” “The hand-lettered sign near the gates of Camp Reasoner read: ‘First Lieutenant Reasoner sacrificed his life to save one of his wounded Marines. Greater Love Hath No Man.'” (Wikipedia). The Navy frigate the USS Reasoner was also named in his honor.

He was undoubtedly an example of selflessness; of not hesitating to put the lives of others before one’s own; and was beloved among his men. He was only 27 years old when he died, leaving behind a young wife and a baby boy back home.

“Although I wasn’t yet two years old when he died,” says his son Michael, “I can think of no better legacy for a father to leave his son than the one he left me.” Frank would have been 82 this year.

Resources for Interviewing a Parent, Grandparent, or Elder

Additional Sources for This Piece John and his second wife, Natalie John and Ninta, one of our caregivers. The Basilica of St. Francis in the sacred Italian city of Assisi. A gunner’s view from a HU-34 Sikorsky in Vietnam in 1965. HU-34 was the helicopter John, and all marine pilots, flew during the war. Each mission included an aircraft commander, or pilot – John’s role; co-pilot; crew chief, and gunner.

« Do You Remember Barbara
How to Die Well »